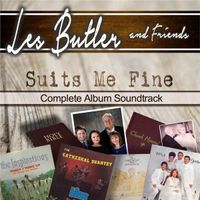 From the recording Suits Me Fine -Performance Tracks (Download)


A Bible and A Belt


They were both made of leather, both black and frayed and worn
I was brought up to respect them since the day that I was born.
One came here from England, it’s been handed down for years.
The other one was ordered from a catalog at Sears.

One my mama read to me tilI I was well into my teens, I thought all the other one was for was to hold up daddy’s jeans. Til I told a lie and learned it had another purpose too. Out behind the shed my daddy said this will hurt me more than it hurts you.

One had my daddy’s name on it, the other said King James.
With love they taught us lessons and we feared them both the same.
One led us to heaven, and the other left a welt.
But those were the days when kids were raised with a Bible and a belt.


I remember when I was 12 I stole a dime store comic book.
How mama read where the scripture said to take back what I took.
When I refused my daddy took my arm and said come on,
I needed more he knew, than Matthew, Mark, Luke and John.

Sometimes they made me cry sometimes they made me fighting mad
and I wished I was raised without them, like some other people had.
But now I’m grown with kids of my own, and I know just how they felt. And it seems to me what the world still needs is a Bible and a belt.